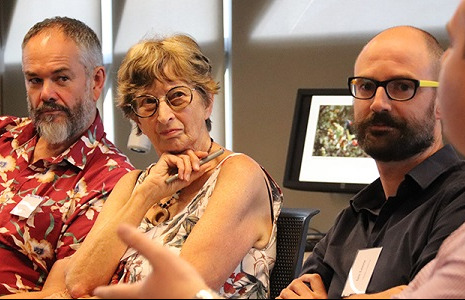 The Ethics and Transport Planning Symposium showcased the work of academics, including PhD candidates and early career researchers, who are thinking critically about the state of transport planning in Victoria and beyond. Building on a three‐part public conversation series held at RMIT University in August 2018, participants explored the ethical questions that confront politicians, policymakers and planners doing urban transport planning. The symposium aimed to:

(1) Grow a critical mass of thought-provoking perspectives on transport planning.

(2) Explore new possibilities for collaborations across academia and practice. Based on what is detailed in the report that follows, we are well on our way to reaching these aims.

The tone for the event was set by two keynote presentations, one by Dr Joan Staples from RMIT University and the other by Dr Suelette Dreyfus from the University of Melbourne. Joan laid bare the problematic context for transport planning in Australia, foregrounding the negative influence of neoliberalism on society and democratic planning. Joan urged participants to be more strategic with their research outputs, and to help combat the deleterious effects of deregulation and privatization by supporting the struggles of civil society groups.

Suelette, in a very provocative presentation, explored the ethical dimensions of digital tracking technologies which allow governments and corporations to collect real-time data on private citizens. Her contribution highlighted the threats that GPS-enabled transport innovations like ride-sharing apps and transport network pricing present to our privacy and civil liberties. Not surprisingly, themes from both presentations threaded throughout the subsequent academic sessions and panel discussions spanning two days.

In the academic stream, the organising committee accepted 15 abstracts from researchers representing universities in New South Wales, Queensland, South Australia, Tasmania and Victoria in addition to one abstract from New Zealand. RMIT University and the University of Melbourne were strongly represented and many of the participants were PhD candidates or early career researchers.

The revised symposium program provides a sense of the diversity of academic contributions, from high-level, conceptual explorations of alternative ethical frameworks that might govern society (Clements) and its planning practices (Whitten) to detailed examinations of the ethical questions raised by emerging transportation technologies (Denham, Lawrie, Scheurer and Woodcock).

Interdisciplinary perspectives also featured strongly in the program, from improving road safety for cyclists using positive psychology (Barter and Isler) to the development and implementation of community-based transport solutions (Stanley). Planning for vulnerable groups within our society was also a key focus, with several participants examining issues related to transport disadvantage in youth (Gilbert) the elderly (Moutou and Wang) and marginalized urban communities (Johnson).

Panel discussions held at the conclusion of both days afforded participants an opportunity to regroup and reflect on the ideas raised by earlier discussions and debates. The panel on Saturday invited activists, community leaders and planning professionals to explore emergent practices that point us towards new understandings about ethics and transport planning. To move beyond the project-by-project battles fought by so many for decades, the panel explored the strategies that activists, local politicians and professionals are formulating in real time, to overcome ethical roadblocks in practice. Although a lofty goal for this 90-minute discussion, the panel did lay the foundation for future exchanges between the academy and practice.

The panel discussion on Sunday provided space for the session to regroup and share their insights from the symposium. What themes cut across the academic sessions, drawing individual investigations together? What ideas and concepts shed new light on the subject of ethics and transport planning? What do we mean by ‘ethics’ in the context of urban and regional transport planning?

The panel concluded that we must be careful that concepts like ethics, and by extension concepts like equity and justice, don’t become empty signifiers in our research; that more collective work is required to first define what we mean by ethics in transport research and ethical outcomes in transport planning practice. On the other hand, the sense of urgency to respond to contemporary social and environmental crises was palpable; society is running out of time to act on rising inequality and climate change! This realization brought the conversation full circle and back to the challenge laid down by Dr Joan Staples—to be more strategic with our research outputs, thereby increasing their impact on society.

The panel also discussed ‘next steps’ for the wider ethics and transport planning initiative. Tentatively, it was decided that participants in the symposium would work towards a journal special issue as the principal output, using SOAC 2019 as an opportunity to advance the development of individual contributions. The conference organisers have just made a call for special sessions and the organizing committee is planning to prepare a submission. The committee also looks forward to sitting down with representatives of the RMIT University Centre for Urban Research and Melbourne Sustainable Society Institute (MSSI) to discuss opportunities to collaborate on a discussion paper, research report or similar output. The opportunity to tie this output to a series of pieces in The Conversation was also discussed. Finally, in terms of outputs, participants determined to investigate opportunities to hold a similar gathering at SOAC 2019 and/or another symposium in a different Australian city in 2020.

In reflecting on the success of this symposium, it is noteworthy that the concept was hatched at SOAC 2017, in Adelaide, when a group of transport academics, early career researchers and PhD candidates from Australia and New Zealand met to discuss ways of increasing collaboration in research. Co-hosting the inaugural symposium has put this goal into practice, and the organizing committee is grateful to the RMIT University Centre for Urban Research and MSSI, in addition to our colleagues from interstate and overseas, for backing the initiative with their resources and time. The wider Ethics and Transport Planning initiative is a truly collaborative project that has engendered a sense of collegiality amongst researchers, practitioners, community leaders and students who share our vision for an equitable, sustainable and just urban future.

Members of the organising committee represent numerous programs and research groups based at both institutions. At RMIT University committee members are drawn from the School of Global, Urban and Social Studies Planning and Transport in City Regions Program, Critical Urban Governance program and Transport@RMIT. At the University of Melbourne committee members are drawn from the Melbourne School of Design’s Department of Urban Planning and Design, MSSI’s Future Cities Research Cluster and the Transport, Informal Urbanism and the Health and Urban Design (THUD) research hubs. Members of the organising committee are:

In conclusion, the organising committee would like to convey its gratitude and thanks to the leadership of RMIT University Centre for Urban Research and MSSI at the University of Melbourne for their generous financial support. We would also like to thank the staff at both organisations who played an important role in organising the event. In addition, we thank the Victorian Chapter of the Australasian Early Career Urban Research Network (AECURN) for their assistance and financial support.