Book Launch: Degrowth in the Suburbs 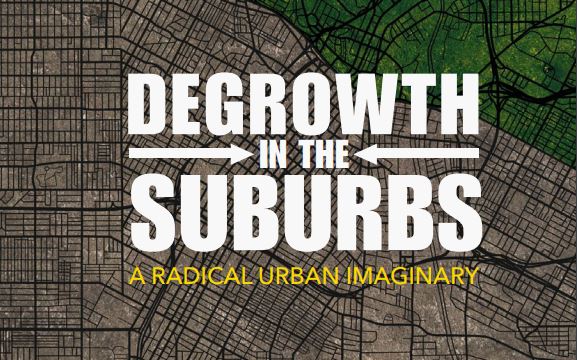 Join us to launch Degrowth in the Suburbs: A Radical Urban Imaginary by Dr Samuel Alexander and Professor Brendan Gleeson.

This book addresses a central dilemma of the urban age: how to make suburban landscapes sustainable in the face of planetary ecological crisis. The authors argue that degrowth, a planned contraction of overgrown economies, is the most coherent paradigm for suburban renewal. They depart from the anti-suburban sentiment of much environmentalism to show that existing suburbia can be the centre-ground of transition to a new social dispensation based on the principle of enlightened material and energy restraint.

This book will be launched by David Holmgren, co-originator of the permaculture concept, followed by a few words from the authors.

Dr Samuel Alexander is a Research Fellow with the Melbourne Sustainable Society Institute and a lecturer with the Office for Environmental Programs. He teaches a course called ‘Consumerism and the Growth Economy: Critical Interdisciplinary Perspectives’ as part of the Master of Environment. Dr Alexander’s interdisciplinary research focuses on post-growth economics, voluntary simplicity, ‘grassroots’ theories of transition, and the relationship between culture and political economy.