The Green New Deal - Opportunities and Obstacles: Comparing Proposals in Europe, the US and Australia 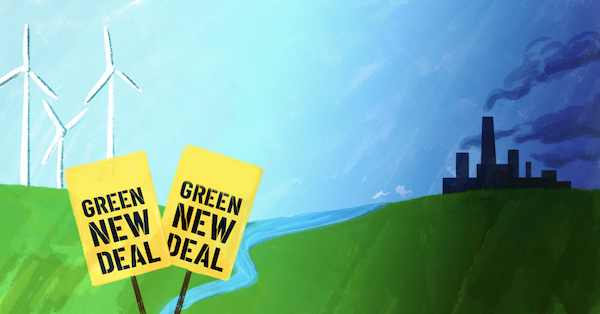 Green New Deals have been proposed in the United States, the European Union, Australia, South Korea and other countries. Despite differences, they share the common aim of dealing with the climate emergency by way of creating new socio-economic policies that attempt to simultaneously decarbonise the economy while combatting inequality, mass unemployment and increasing poverty. What are the respective strengths and weaknesses of Green New Deals? Are they politically feasible following the global crisis caused by the Covid-19 pandemic, and how are they to be funded? What are some of the differences between the European, American and Australian Green New Deals in terms of their international political support or the opposition they have mobilised to any such public policies?

In this webinar Professor Robyn Eckersley and Associate Professor Peter Christoff will discuss and compare approaches to Green New Deals. This discussion will be chaired by Professor Boris Frankel.

Associate Professor Peter Christoff teaches in the School of Geography, at the University of Melbourne. A political scientist by training, his research and teaching concentrate on aspects of climate politics and policy, and environmental policy. He has written about Australian climate mitigation politics, international climate negotiations and the United Nations climate treaty process, on globalization and the environment, on the Green State, and on ecological citizenship.

Professor Robyn Eckersley is Redmond Barry Distinguished Professor in Social and Political Sciences at the University of Melbourne. She has published widely in the fields of environmental governance, politics, political theory and international relations, with a special focus on the ethics, politics and governance of climate change. In 2019 she received a Distinguished Scholar Award from the Environmental Studies Section of the International Studies Association.

Professor Boris Frankel is a social theorist, political economist and cultural critic and an Honorary Principal Fellow at MSSI. Professor Boris Frankel has had over 40 years teaching and research experience at universities in Australia, Europe and the USA. Professor Frankel has a strong research interest in Australian and international comparative political economy and social policy. A long experienced media commentator and participant in policy debates, his books include Beyond the State?, The Post Industrial Utopians, From the Prophets Deserts Come, When the Boat Comes In: Transforming Australia in the Age of Globalisation and Zombies, Lilliputians and Sadists: The Power of the Living Dead and the Future of Australia.